Scrambling in a Tiger Moth

We have a guest blogger... Gillian describes her Tiger Moth trial lesson at the last Sunday Scramble at Bicester Heritage: 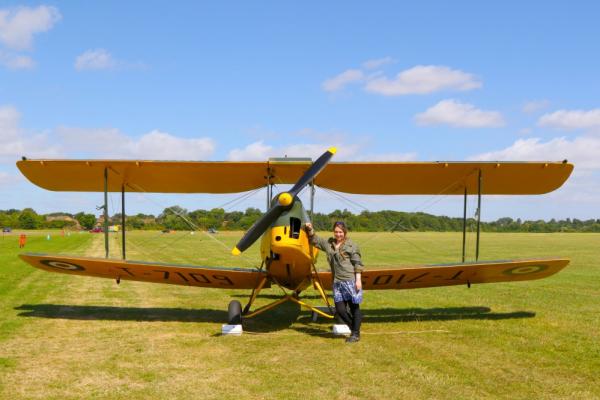 To try my hand at flying the Tiger Moth was a somewhat spontaneous decision.  Although I guess those who know me wouldn’t have been too surprised to watch me spot this fantastic vintage bi-plane and immediately find myself drawn towards her.  Being particularly interested in transport history as well as an old-fashioned girl at heart, the conclusion of spotting G-AOIM glinting in the early morning sun was likely already decided before things had even begun.

Cue a casual enquiry that swiftly led to a flight lesson being arranged for that morning.  My name was carefully written into the Tiger Moth’s flight schedule for the day and I felt a hint of apprehension kick in. Given that all my experiences of flight so far had been positive, this surprised me. I thought back to my first flight – a passenger ride in a helicopter – where the pilot remarked how unusual it was to have such a conversational passenger beside him given the glass floor beneath us. From this I learned I lacked a fear of heights for it hadn’t occurred to me to be anything other than enthralled by the moving scenery below. Next came a flight experience in a glider - here I found I wasn’t entirely keen on the moment when the designated tow plane lets go and your glider’s nose suddenly dips towards the ground – but then taking control and doing spiral turns up in the great blue sky proved to be incredible fun. Then just last year came my first flight to London in a big passenger jet - what a heady cocktail that proved to be – the noise of a jet engine right outside my window, the curiosity of what the view would be like above the clouds and the absolute thrill of speeding down the runway to have got going in the first place. Clearly, an appreciation for many aspects of flight were already in place but I’d never flown a plane with an engine and certainly not as legendary a plane as a Tiger Moth. How would I get on? 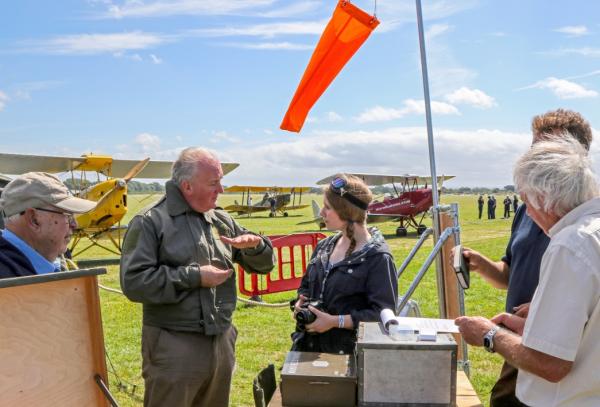 I met with pilot Chris Thompson of Finest Hour Experiences at Bicester Airfield and we began with a brief on some of the basics. I then borrowed a flying jacket, helmet and goggles and carefully climbed into the Tiger Moth, stepping on marked-out spots to avoid putting too much stress on the wing.  Next came the click-click of the 4-point harness before we checked the intercom functioned between us.  All was well and with that a team member worked with Chris, pushing the propeller round, to help get the Tiger Moth started. 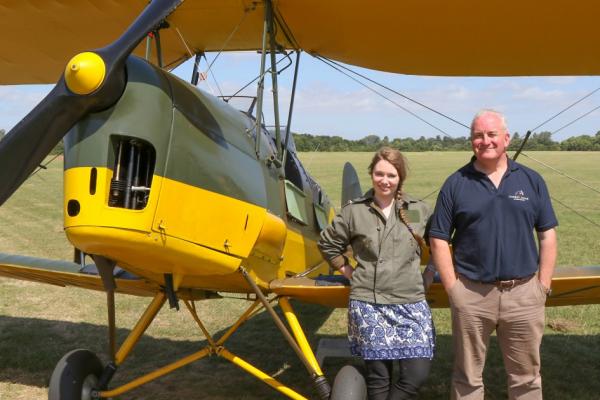 The 130hp De Havilland engine quickly fired into life and her rhythmical note sounded all around us.  It was a beautiful sound, both purposeful and busy. Curious spectators watched on as we taxied out, weaving from one side to another to counteract the lack of visibility directly in front.  Once in position for take-off, Chris opened up the throttle and the Tiger Moth quickly picked up pace as she sped across the grassy airfield. The Tiger Moth lifted herself up off the ground far quicker than I expected and continued to climb keenly, leaving the hangars and outbuildings of what was once RAF Bicester looking ever smaller.

Now that we were no longer tail dragging across the airfield I could see the horizon stretched out in front of me. It was a beautiful sight with fields of green, yellow and burnt umber going on for miles in all directions.  Maintaining a straight and level course with the horizon was what Chris wanted me to initially focus on.  I took the joystick in my hands and it occurred to me how remarkably light it was to manoeuvre.  My first task was to keep the Tiger Moth straight and level as best as I could. This sounded like a simple enough task but as soon as Chris handed over control I was immediately busy with feeding her continual correction as the little biplane got pushed around by crosswinds. It felt as though we weighed nothing at all. No sooner had I lowered the nose, I had to then lift it again. My first instinct was to feel a little frustrated at how easily the Tiger Moth could be blown from her course and I imagined our aircraft to be not much more secure as one that were made from paper. Chris did not seem concerned. He took back control and continued the lesson by encouraging me to move the joystick from side to side in-order to bank the wings as well as moving the joystick forwards and back as I’d done before to control the pitch. This would now mean I could steer as well as adjust the Tiger Moth’s height. Chris offered control once again. I took a deep breath and felt the challenge of the weather again. The Tiger Moth felt so incredibly sensitive. It only took the slightest of movements from my hands to direct her.  Rather than becoming overwhelmed by the way the Tiger Moth was so easily bobbed up and down by the wind, I decided to focus entirely on making the most of her mechanical sensitivity and tried to use it as an advantage, feeling what was going on and working with her to counteract what the weather was throwing at us.  As soon as I did this, the apprehension I’d felt dropped away and I started to enjoy this task instead of resenting it. 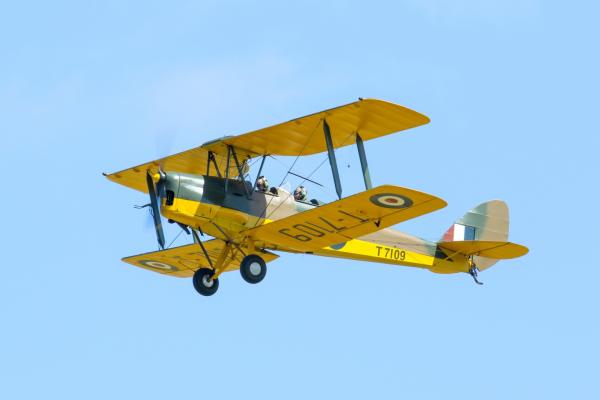 As I handed control once more to Chris, he pointed out an up-coming landmark and asked if I might take some photographs of a house on the ground below whilst he circled the Tiger Moth round it. With the vibration going through the aircraft and the air rushing by the open cockpit, this was quite an invigorating shot but I was successful and we continued on our way.  Now it was time to also make use of my feet in controlling the Tiger Moth. Chris demonstrated how the pedals on the floor control the rudder and then handed over to me for a try. 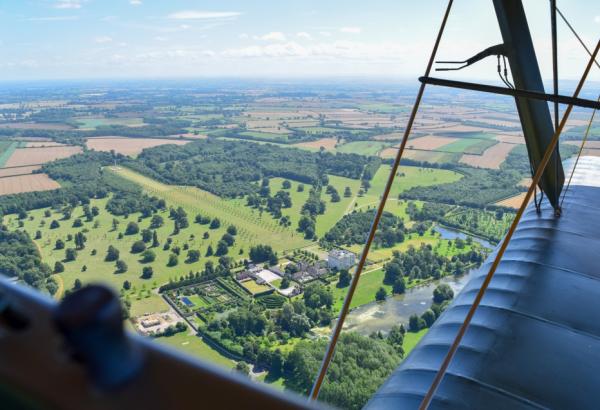 We had now covered most of the basics within the Tiger Moth and so Chris asked me if I had my camera held secure within the aeroplane. I confirmed that I did and almost immediately I felt myself pushed back in my seat as we launched straight into a loop-the-loop. This was so unexpected that it genuinely caught my breath as I watched the sky trade places with the ground. I was suddenly ever so aware of the harness that had been clicked into place down on the airfield and fumbled for the end of the belts to tighten them up some more.

As the Tiger Moth swept back down towards the ground I anticipated having a moment or two to recover but Chris must’ve had other ideas, for no sooner had we returned to the point where our loop had begun, the Tiger Moth launched straight up towards the sky again. I felt the plane slow as she climbed just a little more and briefly I felt as if my perception of time slowed right down with her.  I felt a little sick as I felt her run out of momentum and Chris turned the Tiger Moth round for a stall right turn and a fall back down towards the ground. I could hear the air rushing past and for a few moments I closed my eyes because the view just made me feel sick. My hands fumbled clumsily along the inside of the cockpit, looking for something to hold on to even though I figured it wouldn’t make any difference. 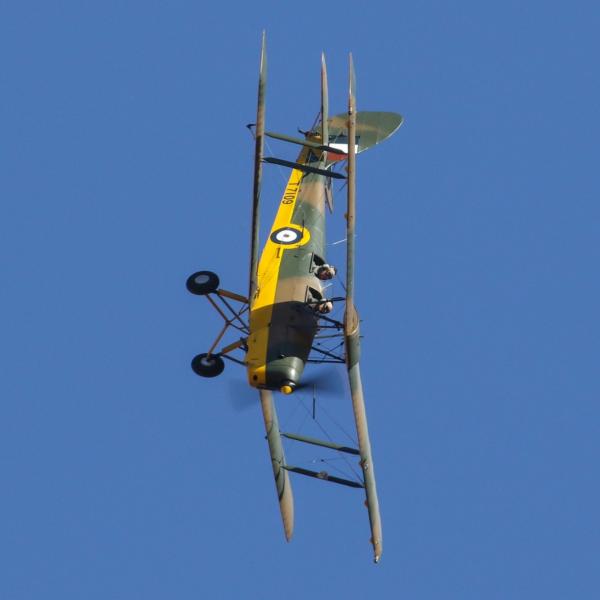 The suddenness of these movements produced in me an intoxicating mixture of fear and joyful exhilaration. At first I felt terrified but this was quickly replaced by a feeling of a complete and utter high. I wanted to tell Chris to stop whilst simultaneously feeling tempted to encourage him to push the aerobatics even harder. I simply had to let go and trust what he was doing. My physical and mental states were poles apart – my body felt utterly shocked by the physical sensation of aerobatics in the sky but my mind was racing like never before with the excitement of it all.

We came out of the stall turn and went into another manoeuvre that brought us back upright (it was a barrel roll- Chris!) and in line for coming in to land. As I tried to recover some composure, I watched as the grass looked like it was coming up to greet us.  We landed neatly and the Tiger Moth gently touched down onto the ground as lightly as she had taken off. I was very pleased to have completed the flying lesson with Chris, even if the aerobatics had taken me a little by surprise. The Tiger Moth was much lighter and sensitive than I would’ve imagined but as I climbed out I guessed this nimbleness would be a very good quality to a keen pilot.  I looked this lovely bi-plane over as curious spectators watched Chris & I get some photographs together. I felt very proud that the first powered aircraft I’d flown was a 1940 Tiger Moth and couldn’t help but have the feeling that one day I’d be back for more.