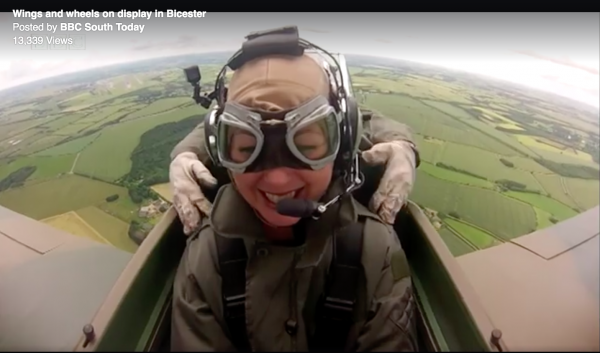 Our involvement with Flywheel started a few days before the event itself with a request to fly the BBC in support of the Event’s pre-publicity.  Eventually, the cloud lifted enough for us to provide BBC South reporter Katharine Da Costa with a short flying lesson, the airborne footage from which was featured on BBC South News the day before Flywheel.

As usual at Bicester events, our plan was to offer 20 minute trial flying lessons, but first we stumbled across a group of costumed re-enactors parading as World War One Royal Flying Corps; even though the Tiger comes from a later era, we couldn’t resist the opportunity for a brief photo opportunity with this charming bunch before our first customers arrived. 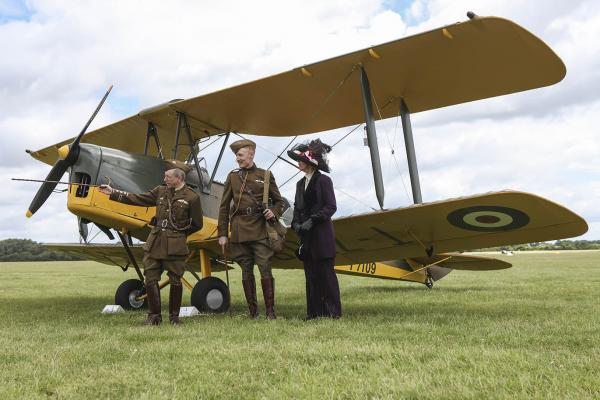 Once flying started, a visitor was intercepted by our veteran fighter and bomber pilot, Tommy Thompson. As the conversation developed, it became apparent that not only were Tommy and the visitor both ex-RAF but they flew on the same squadron at the same time. Once they worked out who each other were, it turned out that the visitor, Brian Ball, had led Tommy in the same formation as ‘Black 3 and Black 4’ on 4 December 1951, a day known as ‘Black Monday’ due to the fact that the RAF lost 22 fighters in bad weather in one morning. Suffice to say that, after approaching to land as a pair in close formation, Brian landed his Vampire to observe Tommy flying his in a very low visual circuit to land from a subsequent attempt; 2 other pilots from the same squadron chose to climb, their flights ending on the end of a parachute after running out of fuel. This reunion was a very moving moment; we may just tell the story of ‘Black Monday’ in more detail in the December blog on our ‘warbirds’ site.

Once the flying display element of Flywheel started, we slotted our flights in between display items and so kept busy throughout the Day. One of the pleasures of an event such as this is catching up with old friends, so the arrival of friends from the Tiger Club and Peter Teichman, parking next to us in his P51 Mustang, raised smiles. We had a hand in Peter’s training and still enjoy flying with him every so often. 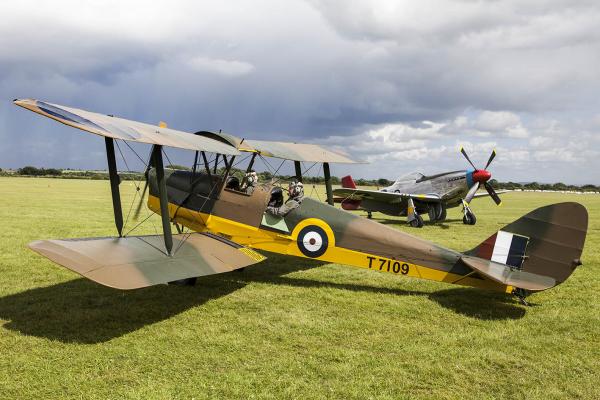 Sunday’s weather offered even more promise than our busy Saturday, and so it turned out, but not before we grabbed the opportunity for another photoshoot, this time with the ‘Oxfordshire Home Guard’; our aeroplanes are certainly proving popular as a backdrop for ‘period’ photoshoots! If you saw us flying up and down the crowdline around lunchtime, this was to enable Flywheel’s official videographer, Charles Fynn of Plato Video, to take some air-to-ground footage of the Event from the Tiger. Charles and his brother Harry were kind enough to produce a nice little video montage of our comings and goings. 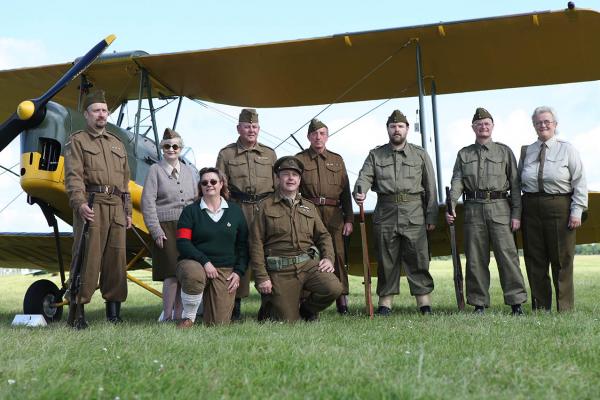 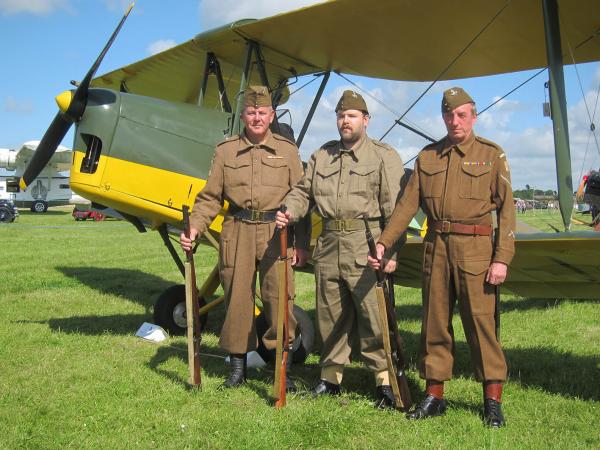 Another very special Flywheel moment came when Eric Hall, a blind ex-RAF interpreter and clerk, arrived for his trip with us, enjoying an introduction to the effects of the aeroplane’s controls, straight & level and turning. In over 31 years and 9000 hours of flying, our Chief Pilot counts flying with Eric as his most rewarding flight ever; after all, its not every day one gets the opportunity to teach a blind man to fly! 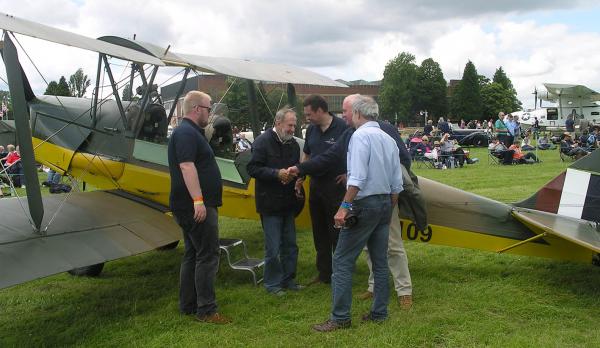 Flying again between the display items, the list of those wishing to experience a vintage flying lesson was increasing, so we flew well into the evening, packing up our stand long after Flywheel’s gates had officially closed. We certainly felt we’d earned our late beer at the White Horse in Duns Tew; the lesson learned for us was to bring more aeroplanes to next year’s Flywheel! 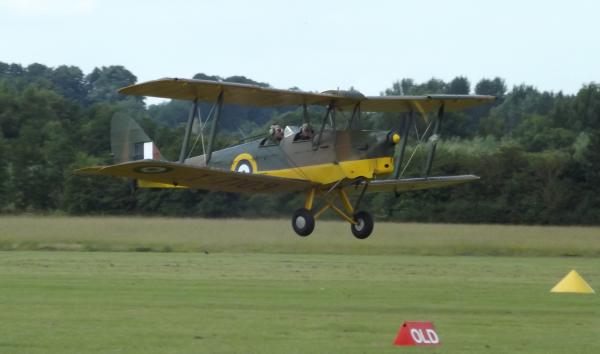 We’ll be back at Bicester Heritage, offering 20 minute trial flying lessons, for the 10th Brunch Scramble on 7 August. We’re also running a competition offering a free flight to whoever correctly identifies the location in our picture of a Tiger Moth in front of a row of Vampire fighters. Please check our Facebook page and Twitter feed for more detail of the competition and for the latest news and deals from Finest Hour! 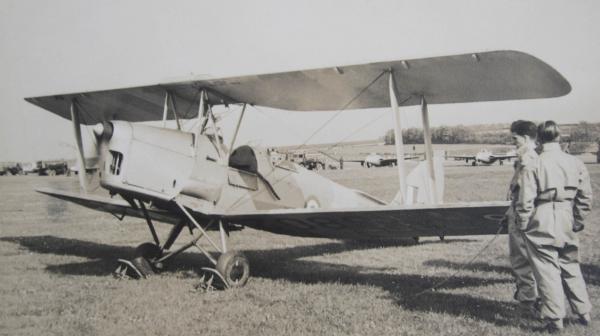