Every so often an interesting and 'different' job comes along and so it was that on 14 June a Finest Hour crew of pilot Chris and groundcrew Mark found ourselves driving through the early morning mist to our base at Bicester Heritage, our task being to fly to Pent Farm airstrip in Kent, from where we would continue to Calais and then Dunkirk.  The plan was to fly a couple of short trips from Dunkirk airfield, with journalist passengers as part of a project to commemorate the air elements of the Dunkirk evacuation, all organized by the Vintage Air Rally team. 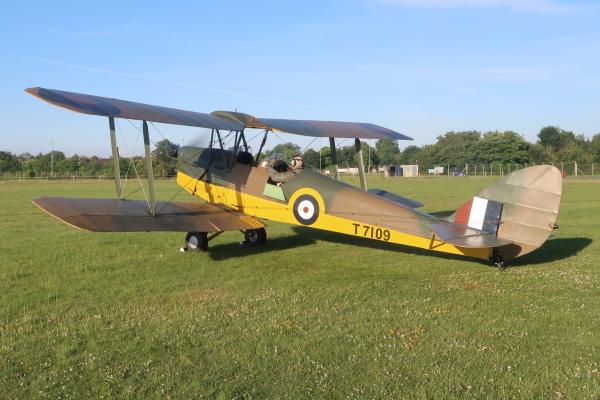 Airborne at 6.40 am into a smooth clear sky, we enjoyed a view of Waddesdon Manor bathed in the early morning sun as we headed South East.  Shortly after 7 am, we were overhead the former Handley Page works at Radlett in Hertfordshire when we spotted what we thought was a return of the mist.  This didn't make much sense, and as we flew past St Albans it was clear we were flying through a layer of smoke at about 1000' above ground level.  Sadly, this was our experience of the Grenfell Tower fire. 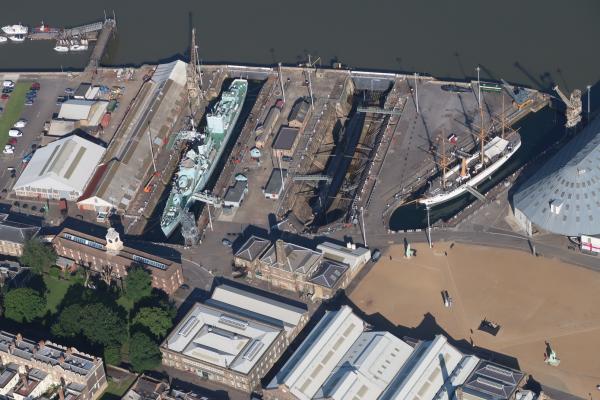 Arriving at Pent Farm at 8.15 am, we rattled through the necessary introductions, Mark being especially busy briefing Press Association staffer Tom Brada for his cross-channel flight in the Tiger and then starting our engine before jumping into Sam Rutherford's PA32 to watch us follow Sue Girdler in TG Aviation's Stearman to Calais, thus ensuring Finest Hour had the essential groundcrew support in France. 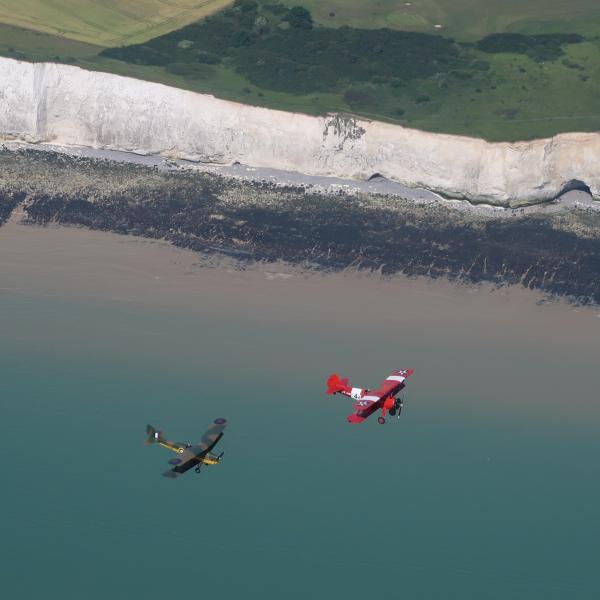 After customs formalities in Calais, we carried the Goldbug Agency's Neil Johnson on the short hop to Dunkirk, where we met Francois Colin and his Bucker Jungmann.  At this point, Finest Hour's Tiger Moth proved to be the best catered biplane, as we dispensed sausage rolls, pork pies and cold drinks to the other crews, while those manning the cameras worked out how best to record the next part of the day.

The plan emerging was to fly the 3 biplanes past the beach at Dunkirk twice, firstly to be filmed from the air and then, after the film crews had deplaned and caught a taxi to the beach, to be filmed from the ground.  For the first run, we carried CNBC journalist Upton Sinclair.  Inter-cockpit communication in a Tiger Moth can be problematic at times, so when our pilot first heard Upton speaking, he tried to respond, thus interrupting Upton's perfectly-timed commentary to camera - oops!  From then on, the contract was to remain silent unless an urgent safety message needed to be passed. 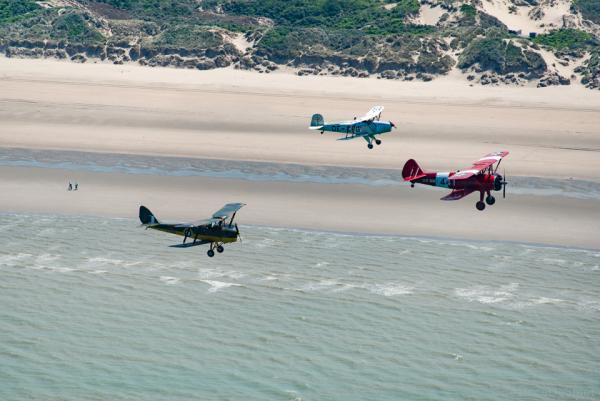 With no volunteer to ride in the Tiger for the second run (Mark sensibly opting to bag his third aircraft type of the day and observe matters from the Stearman!), the trip was flown solo prior to landing in Calais. 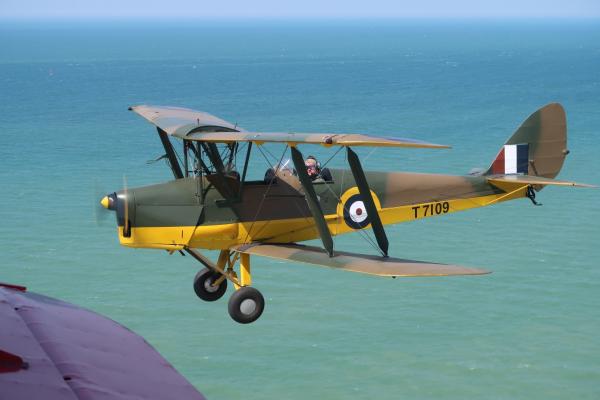 On arrival at Calais, there was more filming to be done, with Sam being interviewed and the Tiger acting as backdrop.  The minor complication to this was a strengthening easterly wind, which threatened to move the Tiger from its otherwise suitable position on Calais' tarmac.  In the picture below, Mark does his best to maintain a low profile, while securing the Tiger during one of Sam's interviews. 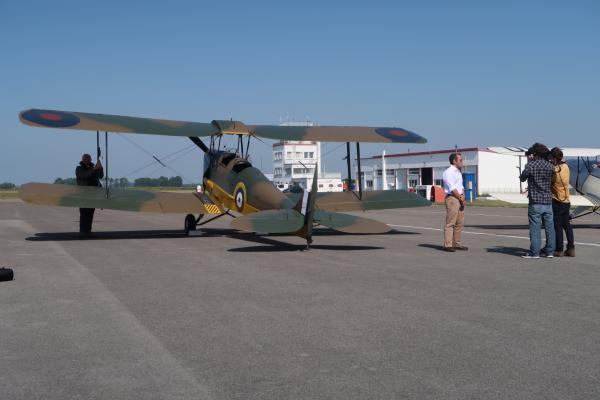 We suspect that, throughout the day, the other participants were mildly amused by the eccentricities of our ancient aerial contraption.  With no starter motor, we had to run through our well-practiced starting routine each time, a two-man operation with Mark swinging the propellor by hand.  Equally, where most aeroplanes have brakes and a third wheel the Tiger has a simple skid at the rear.  This requires a slightly different skillset to operate than the more modern machines, one of the key skills being to decide when enough is enough and an attempt to taxi (especially on tarmac) would be futile.  As the wind increased at Calais, it became clear that, unlike the other aeroplanes, we would be unable to taxi to the runway for departure.   After consuming beaucoup de Croque Monsieurs provided by Sam's lovely wife Beatrice and providing an assurance that we could be airborne within the length of the parking area, Sam negotiated our departure with the locals.  Thus, we carried the Tiger to the eastern edge of the parking apron, from where we took off in front of the control tower.  Positioning the Tiger to enable Tom Brada to grab some pictures of the Stearman during the cross-channel leg, we returned via the white cliffs, a quick refuel at Pent Farm and back to Oxfordshire, the tailwind helping us to arrive in time for last food orders at The White Horse Duns Tew :-) 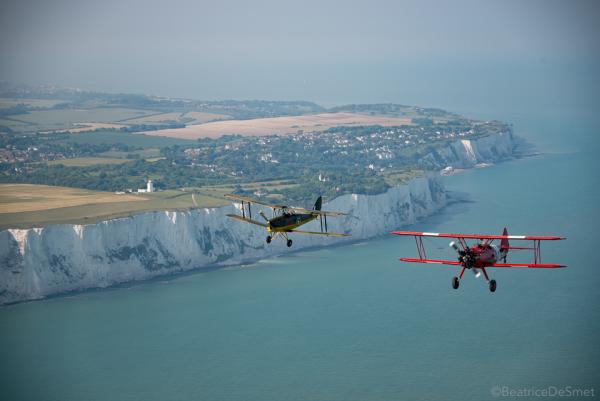 Back to Blighty (Beatrice de Smet)

Finest Hour is always on the lookout for groundcrew and we welcome applications from energetic individuals who share our passion for customer service... just once in a while, our crews might enjoy a day out to rival this one!