22 May saw our newly-restored vintage Tiger Moth biplane G-AOIM make its public debut at the 9th Sunday Brunch Scramble at Bicester Heritage, Oxfordshire’s new venue for all things classic in motoring and aviation.  ‘IM had been receiving attention at Touchdown Engineering at Old Buckenham, whose team is ironing out the inevitable minor glitches as such a ‘new’ aeroplane beds down, so we set off from Oxfordshire by car very early to fly her in from Norfolk on the morning of the Scramble. Thanks to Martin Wright for the lift; he certainly enjoyed his reward, flying across England in a vintage biplane for the return journey!

The plan was to offer 20 minute trial flying lessons, but before we started, we were joined by Ian Meadows, dressed in authentic World War Two Coastal Command flying kit, and his friends Mike and Pam, who just happened to bring a vintage RAF ambulance with them!  Believe it or not, some Tiger Moths were modified to be used as used as aerial ambulances so parking them together wasn’t entirely inappropriate!

Between flights our Chief Pilot, Chris, went for a wander to view the classic cars on display but soon bumped into his neighbours from nearby Duns Tew, Thelma and John Huntley, who had arrived in their 1925 Bugatti Type 30, which we believe may have been the oldest car attending the Scramble. This was the catalyst for some photographs of the Bugatti, Tiger and costumed re-enactors, illustrating the potential of our aeroplanes not only as vehicles of aerial pleasure, but as authentic backdrops for period-style set pieces.  This part of the day was especially poignant as John’s father, who sadly died earlier this year, was a foreman on the Tiger Moth production line at Morris Motors in Cowley, where ‘IM was manufactured in the dark days of 1940. 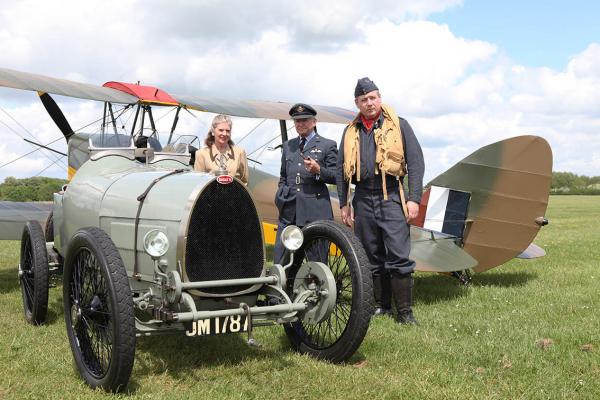 No-one seemed to notice at the time, but we can now reveal that the Tiger’s red fuel tank wasn’t an intentional effort to grab attention, but a temporary fix while her camouflaged tank is being repaired!

We’ll be back at Bicester Heritage, offering 20 minute trial flying lessons, throughout the Flywheel Festival on 2 and 3 July. The Beech 18 will also be there on static display so we’re offering a free flight to anyone whose photograph of any of our aeroplanes at Flywheel make it to our website! Please check our Facebook page and Twitter feed for more detail of the competition and for the latest news and deals from Finest Hour!